Welcome to Newbridge College Canoe Club. In the earlier years when the College still had boarders, the club had a larger membership than recent years, and the emphasis was on racing. Currently, members are trained in the mastery of their craft, where the emphasis is placed on safety and canoeing technique. This results in the members having plenty of fun, while they learn in the company of qualified instructors. 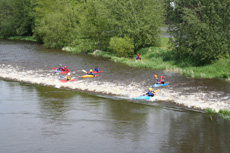 Canoeing takes place on the Liffey in front of the College buidings every Saturday morning. Sometimes there is tuition in a swimming pool, the canal at Digby Bridge and also river trips on other stretches of the Liffey, the Boyne, the Barrow and the Avonmore river near Laragh, Co. Wicklow. Members are chosen for each activity depending on competence and ability.

A summer camp is organised by the College each August for incoming 1st Years, in order for them to get a feel for the range of sports activities on offer. Canoeing is one of these activities, and is run by trained instructors. Check out the link to the College Online Calendar for details.

Founded in the late 1960’s under the directorship of Father Jordan O’Brien, O.P., the membership numbers had risen to 120 by 1972, by which time the club had 40 canoes. Ian “The Admiral” Doolan and John Lynch were founder members and regularly brought honours to the College by winning many competitive races.

DW = Devizes Westminster International Canoe Race is one of the ultimate tests of endurance. Travelling for 125 miles in kayak or canoe from Devizes to Westminster, It pushes competitors to their physical and mental limits. It was first run at Easter 1948, when four boys, all aged just 17, completed the challenge in a time of 89 hours and 50 minutes. The present record of 15 hours 34 minutes was set in 1979.

Joe McTernan first brought canoeing honours to the College when, partnered with Joe Kelly, he finished second in the 1971 School’s race. After leaving Newbridge, both Joe and Brendan were active members of the Kilcullen Canoe Club.

So you can see that some past members who have excelled in this great sport have received their foundation with our club. Go on and splash out !

Go with the flow river adventures